Tarot for Teddy: Uniting the Masculine and Feminine

Last month Teddy came to me because he was starting a business with his duck friend Anatra and needed some help navigating that transition. When I checked in with him this month, he was unusually silent, even for a stuffed bear. I hoped things weren't going badly for him.

"Everything's going just great," he said, ​and started to choke on his coffee.

Once he settled down, I asked him what he wanted to talk about. If everything was going well, what was bothering him?

"Well, that's the issue," he said. "Everything's changing, everything's better. But I don't know what to do about any of it."

After talking a little, we discovered that the pragmatic, organized Teddy was having trouble balancing the the wonderful new things in his life with his desire to control them. He was having trouble setting boundaries, or knowing when he should just go with the flow and when he should take a stand. Specifically, he was having a hard time getting a handle on his relationship with Anatra now that they complicated things by having a business relationship.

​I decided to make up a spread for him to help him explore how to balance his desire to experience growth in his life against his natural caution which, he worried, might cause him to mess things up with Anatra.

For Teddy, I decided to use the "Legacy of the Divine" tarot since it has a masculine feel to it and it's easy to relate to as a client if you know nothing about tarot. I laid out what I call a "Be the Balloon" spread. First we put a card at the bottom to represent himself, called the significator.

He chose the King of Coins to reflect his pragmatic, business-oriented nature. Above that we laid out four cards that represent expansion outward, like the air that blows up a balloon--in the areas of mind, spirit, emotion, and the physical realm. Above those we laid out four cards in a similar way, representing restraint, or form--a pushing back to create a boundary that keeps the balloon from exploding. 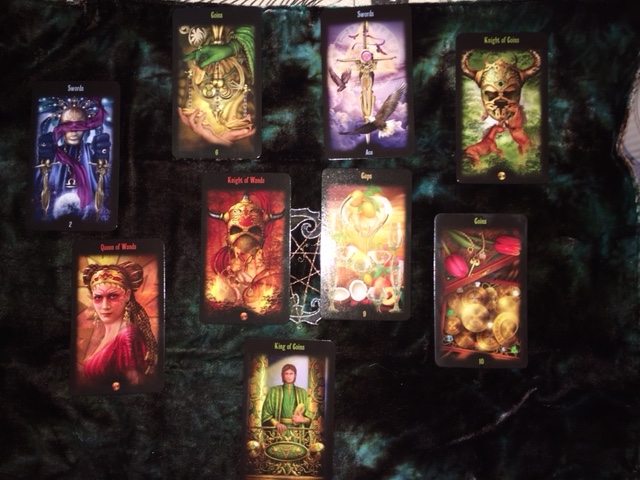 Then, we turned the cards over and looked at each pair together from left to right. "In the realm of air or thought," I said, "we have the Queen of Wands in the expansion position. She can represent a person who  is energetic, charismatic, and never does things half way.

Or she can represent a similar energy and drive in your thoughts. Pushing inward, we have the Two of Swords, which is about choice, or being stuck by refusing to make a choice. What do you think that means?"

Teddy's mouth dropped open. ​"Anatra comes over about lunch time and we work all day in my office. But then she doesn't want to leave, and she's started bringing things to cook for dinner. It feels like she's been pushing things too fast."

"So you've kept her at arms length then? What do you want?"

He hesitated, briefly, then after some thought broke out into a huge smile. "I want her to move in, but it's too soon," he said. "Isn't it? I've been worried that mixing business with pleasure is a bad thing. Is this saying maybe I can have both?"

"I think it's saying you need to decide what you want," I said. "Let's move on to the next space, of spirit and creativity. The Knight of Wands is enthusiastic, competent, and doesn't hesitate. Sometimes he can be brash and impetuous. The Six of Coins pressing inward is about giving and receiving, balance and harmony--the kind of harmony our friend the Knight is a little too reckless to understand. How does this show up for you?"

"I think this sums up where we are in our business relationship right now," he said. "We both get excited ​and charge ahead, and that was fine at the beginning but now it feels like we need to figure out a way to work together."

"Do you ever ask for help with things?" I asked, knowing the answer.

He grinned. "I'm not good at that. But I think we do need to settle in to a more mature working relationship​, where instead of both trying to do everything we figure out what our strengths and weaknesses are and maybe try and complement each other. And before you say it, I bet that would be good for our personal relationship, too."

This time, I grinned. "You bet. Now, emotions. The Nine of Cups is about as good as you can get. ​Everything's wonderful, and many think of this as a wish-fulfillment card, meaning if you wish for something, you can have it. The Ace of swords...here means a new idea, new clarity."

"Like backing up from that two of swords and getting it right?" he said.

"If that's what you want," I said. "But I do notice that the top cards are all coins, and swords--practical matters and thoughts. I think you can find quite a nice balance for yourself by figuring out what you want, and just making it happen, instead of avoiding things."

"Ok," he said. "I'm game. Let's look at the last pair. I notice that they're both coins, in what you said was the place of manifestation and material things."

"Yup, which is why it's good to do those last," I said. "The ten of coins is also a great card to have show up -- it indicates success, but also the end of a very profitable cycle. The Knight of Coins is practical, dependable, someone who can be counted on to get the job done."

I agreed. "These feel kind of like a handshake, like sealing a deal. The knight of coins, maybe he's the new you; a little less rigid than the king, cautious but still always moving forward."

"And it's time to move forward," Teddy chimed in. "You're right about that Ten of Coins. I'm in a good place now, but it's time for the next step in the journey, and that won't happen unless I let it. I can't wait!"